We celebrate dogs with artwork to remember these very special pups for decades to come! Each of these three dogs belongs to a member of our United States Military and have been helped through a Non-Profit called Dogs on Deployment (DoD). Dogs on Deployment is a foster network helping deploying military find temporary homes for their loved pets while away.

Each year DoD has a contest in search of one special dog owned by a military member to serve as a mascot for Dogs on Deployment. For one year, that mascot will represent DoD and share with the world what this wonderful organization does!

Here are the 3 finalists for 2018. Peanut the Chihuahua won, but all have great stories and will continue to spread the word about Dogs on Deployment!

Greyboy Pet Prints sent each of these pups a handcrafted etching created from their photo. Each dog mom or dad sent in a couple pictures and the best image for each was transformed into fine art. The photo was etched to a metal plate, inked, and paired with fine art Italian paper to be hand-pressed through an old-fashioned printing press. The artwork is meant to celebrate and enjoy these three dogs that mean so much to their owners.

Without further ado, here are their etchings and their stories!

__________
Peanut (original photo and etching crafted from that photo) 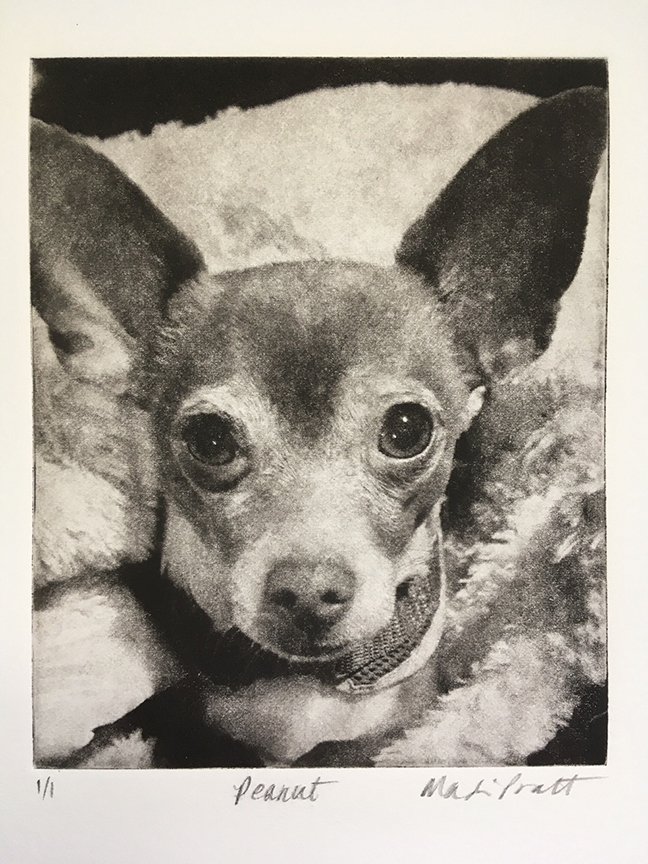 “Around Labor Day of 2015, while stationed in Fort Hood, Texas, Michelle saw a Facebook posting from another military family who received orders to Maryland. They were trying to adopt out their two chihuahuas, one of them being Peanut. Michelle agreed to try her out for the weekend, and soon found Peanut to be the perfect cuddly companion. She arranged with the family to adopt Peanut for herself. It was good news for this dog, who had already been rescued from a shelter by her former owners and was now en route to her furever home.

Michelle and Peanut especially bonded after Michelle’s surgery in late 2016. Peanut picked up on signals and enough body language to know how to be a four-legged medical aide to Michelle.

Around that same time, Michelle received word that she was deploying to Kuwait in February 2017.  She searched and searched for a long-term boarder for Peanut which led her to find Dogs on Deployment.  Reading about the foster network of volunteer families across the United States gave her hope that Peanut would be left in equally good hands.

Fortunately, through the Dogs on Deployment foster network, Michelle found the perfect match to temporarily foster and care for Peanut while she deployed to Kuwait. A visit with the foster family put her mind at ease! Peanut lived a life of luxury with three other friendly dogs, a two-acre yard, a pool with a separate doggie wading area, and a large beautiful home with many doggie doors!

After several months in Kuwait, Michelle received orders to report to Germany by June 2017. She returned stateside, went immediately to pick up Peanut and started preparations to bring Peanut to Germany with her.

“Most folks in Germany haven’t even heard of Dogs on Deployment and their commitment to service members with pets, but we intend to change that with. Peanut and I will be working together to share DoD information through groups like the USO and the MWR program on base. That way if our service members move back to the states, they’ll know all about Dogs on Deployment resources,” said Michelle.

_______
Buddy (original photo and etching crafted from that photo) 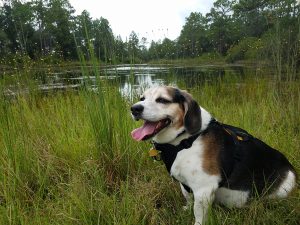 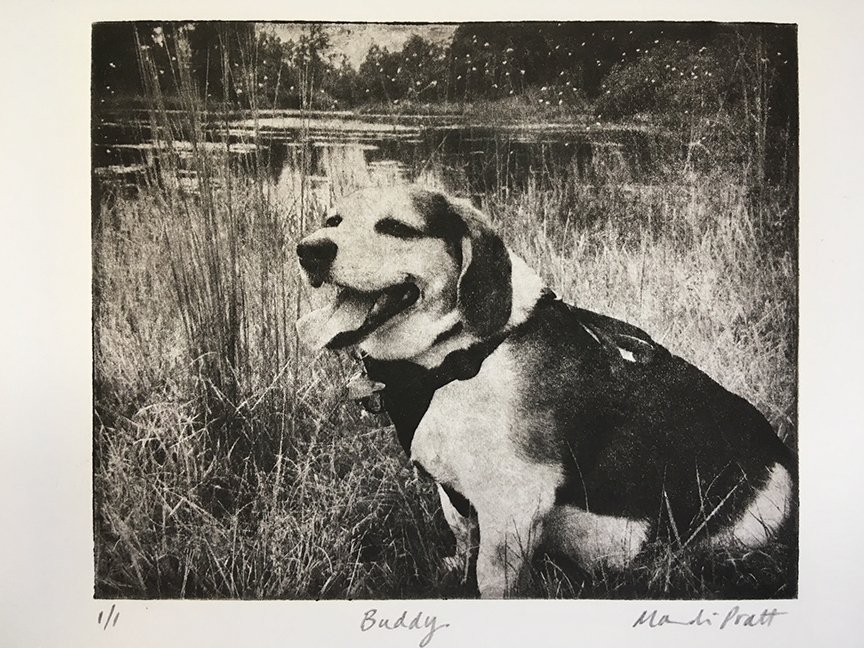 Buddy had been through alot since adopted in 2013 at the Virginia Beach SPCA. His dad said, “He had been there for 5 months and no one wanted to take him home. The first time we met, I felt a connection with him…No one had ever come back to see him or talk about adopting him and when I came back they let me see him during non-visitor hours. I ended up getting to take him home that week. We…soon became inseparable.”

“But the Navy soon had me gearing up to go to RIMPAC in 2014. A week before I was due to leave for RIMPAC my dog sitter dropped out, and I was losing my mind. I was worried…I was not going to give him up.”

“My dad mentioned an organization he heard of…that helps people out in my situation. I got on the DoD website and found the number to a retired couple. I called and was told that they would help without a hesitation. A week later I was pulling out of San Diego on a carrier head to Hawaii. Buddy was on his own personal vacation. He had gravy/broth on his dinner, a half-drained pond became his wading pool, all the love he could get and was safe. It gave me a piece of mind that he was safe.”

“Then…Buddy became famous to my friends and family because of Facebook updates I got of his adventures. Two months later I came home to a fatter and happy Buddy. Over the course of the next year and a half he stayed with two other families. One was a couple back from Japan and wanted to see how their son would do with a dog. I learned that Buddy loves kids and will let them play Legos on his belly. Then Buddy stayed with Jean. Not only did Buddy have a safe place to stay, but I ended up becoming good friends with Jean. Buddy enjoyed staying there and playing with the kids she watched. We still stay in touch.”

“Then Buddy and I moved to Florida. We met the Mercers and Buddy got a new friend. You can look up their adventures #adventuresofTedandBuddy & #adventuresofTedBarneyandBuddy. Since then Buddy and I have been giving back to DoD. For us, getting the word out that there is a place to help watch our pet while you train or deploy, is the most important thing. If we helped one person or one animal, then it was worth it. I am so thankful to DoD for all the help and adventures it has given Buddy. Thank you.”

________
Storm (original photo and etching crafted from that photo) 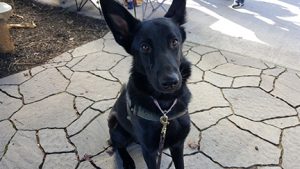 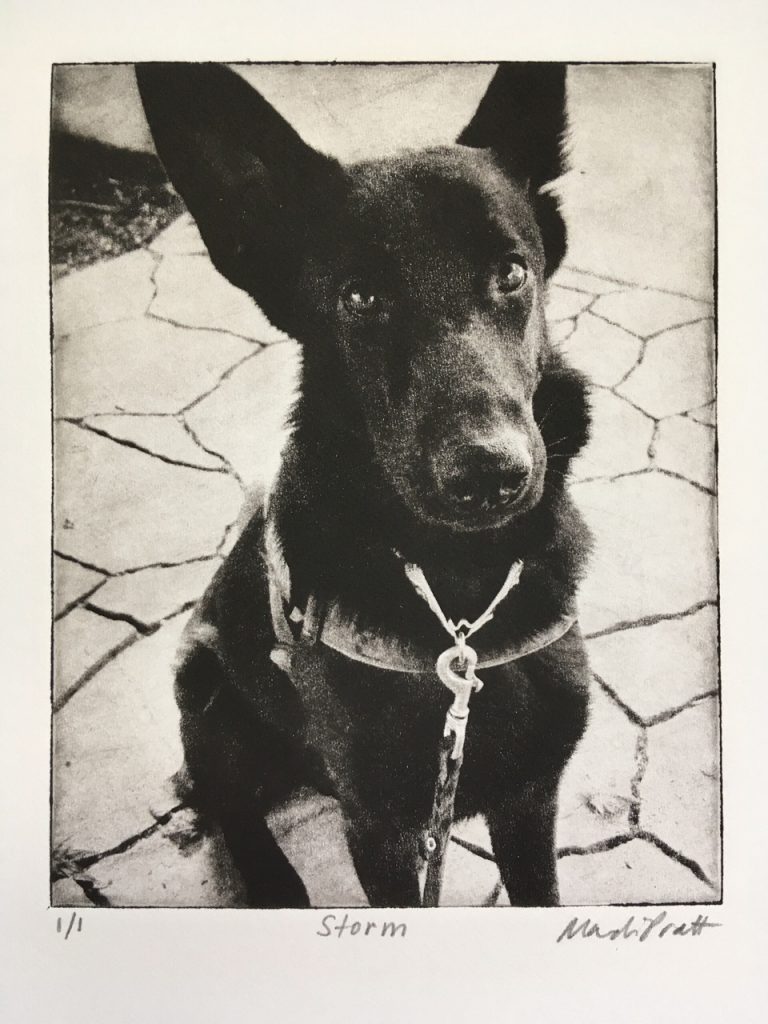 Storm is a German Shepherd who is full of energy, love and a desire to be by her dad every chance she has. Storm’s dad is a U.S. Marine Corps Veteran. He shared, “Storm started her life in Texas with a family that could no longer care for her. They donated Storm to me to be trained as a Service Dog to assist me with issues stemming from my PTSD. A volunteer transport assisted in transporting her from Texas to New York.

I was very nervous about getting and training a service dog. I didn’t really think that I needed a service dog, but my wife insisted Storm could help me. Her exact words were, “You need this dog, because I’m tired of being your service dog.”  From the first moment that she saw me, Storm decided I was her person. She sensed my anxiety and gave me lots of kisses and stayed right next to my side, ignoring everyone else. Storm has helped me function in a way that I wasn’t able to without her by my side. She grounds me, calms me and watches every move I make. She’s ready to alert me in a flash when I have a medical episode coming on. I can’t imagine what my life would have been like without Storm.

Info on Dogs on Deployment can be found HERE.

Info on handmade dog portrait etchings can be found HERE. For any etchings ordered by Father’s Day (June 17, 2018), 25% profit will be donated to Dogs on Deployment!

Thank you for reading! AND thank you to our military who serve our country. Written by a USMC miliary brat 😉

Your goodies are on their way! Check your email inbox. 10% off code is intro10.

How A Pet Portrait is Made